Have you ever thought about other people who are not related to you? the answer for most people in the world is, “No”. This word, “No” is not perfectly come from their pure mind. I had been a child in primary school, and I knew what the truth was. Everyone in the school was really nice friend to each other. We knew how to give, to love and also to be united. When the time passed, those things were changed. This is unbelievable and incredible. Their parents cannot explain why they do change when they become adults. The education does not help them to be good citizens. On the other hand, the parents’ words affect them so much. Most parents try to take the food in the public table for their children as much as they can, and do not care about other consumers. This is really habits that the children get without saying from their parents.

People who I referred to, are selfish, and they are optimistic to their selfishness. Every time, they are ruining the world, they think that it takes long time that the results of their activities will come back to them, or will show to everybody’s eyes. In fact, all the ruining processes are extremely fast and faster than revival processes. For example, I invite you to look at a forest, and I ask you what is faster, between cut or raise a tree. The example does not have to be nature, but can be every time such as, building, cooking, painting, etc. The ways to destroy are all easier than to build.

Those people will not be really dangerous, if they do not have power and money. If they are poor, they can only burn the garbage, smoke the cigarette, be the bad consumer, or use the things which cause poison rubbishes. If they are rich, or they are some big countries, they will be the most dangerous evil of the world. Take a look at our nearest city, Bangkok; people make uncountable carbon dioxide per a day. Look at the current wars between the Middle East and the United States, and the same question, how much carbon dioxide they make. Look at Las Vegas, how much electricity people use per a night, and most electricity was made by the coal. Carbon dioxide is the main factor of global warming which is able to change climate really fast and frightful.

When I was in high school, the book said, the density of water created the stream in the ocean. This is about the water at the North Pole, because of the temperature and the unsalted ice. If there is no ice at the North Pole, there is no more stream. No more stream and changed temperature, then climates change. Gulf Stream is the most important stream of western world. This stream makes Europe, Canada and the United States not too cold. If this stream gets destroyed, Europe, Canada and the United States will be frozen. There are a lot of other more disasters which are caused from this. Imagine! The forest becomes the desert, the flooding, dead animal and dead humans from all these results.

Sometimes when people are rich, they do not care about these bad results, because they know that they can pay for good places after these disasters. If I were one of them, at least, I would want to see beautiful world around me. I do not want to see some people are happy on others’ sadness. The world is not only mine, not only yours, not owned by just someone, but it is ours, all people who live in it. We have our own hands, and rights. Nothing is hard to use them appropriately. We all hold the world which we are born, we are grown, and where is our future.

Original Image from Kaan, one of my best friend in Flickr 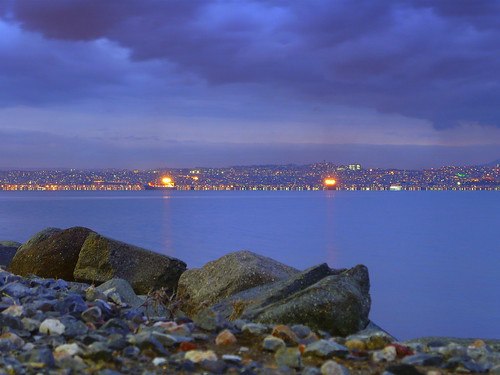 Hi,
I saw your comment on Kaan’s photo. I am wondering if you are an art professor. Also, wanted to know exactly what you mean’t. Did you mean shopped?
Regards
Kelly

Wow, I saw my comment on that photo is right next to yours.
😀

“just only line with light

If I am art prof, I will say the photo got divide to be 4 layers with rhythms.
Smooth and texture, then smooth and then texture.
you can see for sure. ”

first, blur your eyes a little bit, and forget the context of the things in the photo.

You will see perfectly 4 different piece, laying on horizontal.
1 = sky
Sky is smooth with cloud (the only regular animal is bird)
2 = town
Town is the only line with light
A lot of people live in there
In that photo, its seem to have only people, not any wild animal
The texture, seems like diamond or gold with shining things, sth.
3 = water
Water is totally plain blue.
A lot of thing is under there. Fish and weird animals, (it is the beginning of all living on earth either)
4 = rock/stone
Come back to texture again, seem bigger by the distance, but so different. no one, no animal.

So there are really 4 different things, just separate by the thin line, that we cannot see. that’s amazing of nature through the eyes.

I wrote that, well let me post in my blog ^ ^
Should be useful of sby who read it.

Thailand is a tropical country which is rich with culture and natural environment. There are many kinds of forests in Thailand and many groups of people who live in them. Some of Thai cultures help to keep the forest environments. There are 3 groups of people who are not so well-known. They live in 3 different forests, and their life routines and their traditions do not hurt the forest and also keep it more plentiful. They are the tribesmen who live in the mountains, the houseboat families who live in mangrove forest and the people who live in deciduous forest.

The tribesmen’s beliefs help to keep the tropical forest on the mountains in the north of Thailand pure. These people believe in ghosts, and those ghosts live in the trees, so they have to protect the trees. They do not cut the big trees because they believe that the big ghosts live in them. Moreover, all children who are already 5 years old will grow the trees because each of them has to have a ghost to looking after, for their whole life. There are only two reasons that these tribesmen can cut the trees. The first reason is when they need new houses for their marriages. The second reason is when they need the area for their farms. For this second reason, they will cut only the small trees which are younger than ten years old. In my opinion, this is very interesting, that their belief which most people think that are stupid, can protect the forest much more wiser than people with education.

When I went to the west of Thailand with my high school friends, I met another community who grew the trees in deciduous forests correctly. Their lives was more modern than the tribemen. In fact, this has been a project of the Thai King since many decades ago. He began to inspire and give the growing tree methods to these people after Thailand lost more than half of its trees in this forest to Myanmar. Before this project began, many Thai people who wanted to grow the big trees in this forest would cut all grasses and small trees down, then, they put the seeds of big trees in. The seeds of the big trees cannot grow without other small trees, which grow more quickly at first and protect the big trees from the sun and animals. The group of people I met did not take anything from the land. They knew that the nature had its own way to bear again. What they can do was help the nature’s development to be faster. I did not just see their activities; I also visited some tunnels on the mountains. I had a hard time to get to those tunnels. I had to climb a wet mountain all along the way. There were no stairs there, and this was the only place in Thailand which did not have stairs for the visitors. It means they really kept the nature purely. I found many strange and colorful insects and they were not afraid of me. That was because no one disturbed them. In the tunnel, the water dropped from the top stones. All I saw, were the ways that people in this forest kept their homes naturally.

I also visit the mangrove forest every year and once, I found a group of house-boat families who were very harmonious with the mangrove forest environment. I was very excited the first time I saw their boat-houses, because I had seen people in other mangrove forests cut the trees and make houses on the land. I think that they did clever things because the level of the water always changed in the afternoon and at night. I saw the ways they found their food, and it was very intelligent. They made a big room with bamboo under the sea and its door faced to the direction of water. When there were many fish in that room, they would close it and take only the fish they could eat. The small fish and the other useless animal would be released back into the sea. They also got sea mussels by hanging a piece of rope down into the sea and the sea mussels would attach to it by themselves. These ways to find food were much more intelligent than other fishermen who use electricity and nets. Electricity can kill every animal around that area, and most of them cannot be consumed. Nets catch all sizes of the fish, and small fish get caught although no one wants to eat them. This is why I really like the boat-house living. Their perfect life does not hurt any the life cycle in the sea.

Internet users can help the world

You should do:
1. Change your screen and homepage(blog)’s layout to be dark or black.
2. In the afternoon, wear bright color (or white) shirt or suit. (not absorb energy or light from the sun)
3. Try to save the electirc city as much as you can.

Effect and dexcription:
Most of you are reading this blog right now are wordpress user (or other internet user). I know it is hard for you to think about how to save the world’s energy by car or industry. Sometimes, you think that you do not have to care about saving the world’s energy.

As computer users who have many account via many websites, you should love and protect the servers that you use. If the strong storms or flooding water come to kill those servers, you will not have myspace, facebook, hi5, etc. to play with anymore, and you also lost contact of many friends.

1. Most of electricity is produced by lignite.
2. Every process needs the electricity. (include computer hardware’s production and electricity use)
3. They all are causes of global warming.
4. Global warming is cause if stronger storm, thunderbolt and flooding (from ice melting).
5. All disaster can hurt the servers which we are using.

Results:
1. Protect the world from global warming
2. Protect your eyes from the bright screen
3. Save your money (from both electricity and hard ware repairing)